The ability to detect and respond to injury, especially in the central nervous system is critical for animal survival. In theory, a successful injury response has unique requirements: 1) sensitively detect the injury that may happen transiently and locally (avoid missing of events), and 2) initiate an effective response to repair or kill injured cells. Therefore, it might involve different cells that equipped with specialized properties, and cooperate in requirement for such complex task.

In our current work, by using novel genetically-encoded sensors, we for the first time characterized the precise dynamics of ATP, a key signal in regulating injury response, during the whole injury process in the brain. Surprisingly, in contrast to the original prediction that ATP will passively leak out from damaged cells and diffuse out, we observed multiple ATP flashes (we named Inflares) that actively generated in the peri-injury region. These Inflares could be persistently generated for at least 24 hours after injury, and covered hundreds of micrometers in space (Unpublished). Our observation of Inflares answered the long-lasting question on how the spatial-temporal difference in external injury and internal response are bridged. Inportantly, by checking the molecular mechanism of Inflares, we are able to show that these ATP events greatly affect microglia activities and injury outcome, and blocking excessive Inflares prevent damage exacebation and benefit the recovery of injury-related disease, like ischemic stroke. 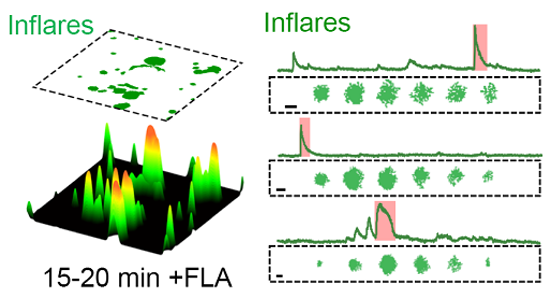 Currently, we are actively exploring more fundamental mechanism in such injury response, for example, how these active ATP signals are initiated and maintained. Meanwhile, we seek to have a global understanding of the brain internal response towards injury, which might involve the the interplay between neurons, endothelial cells, peripheral immune cells, and rich signaling molecules that bridging their communication.