Extracellular signaling molecules, including neurotransmitters, neuromodulators and hormones are fundamental in mediating and regulating cell to cell communications, while dysregulation of either their sense or release is frequently associated with pathological diseases. Probing the dynamics of signaling molecules with precise sensitivity and specificity is the first step in unraveling their function, especially with optical imaging methods that enable direct visualization at cellular level and with high temporal resolution.

In the previous effort, we (with Yulong Li's lab at PKU) have used the G-protein coupled receptors (GPCRs), which are the endogenous neurotransmitter receptors as the backbone to engineer a series of novel genetically-encoded fluorescent sensors. These sensors convert neurotransmitter binding events into a sensitive fluorescent signal, that enable real-time monitoring of neurotransmitter dynamics. Such sensors have been successfully engineered for important neurotransmitters including acetylcholine, dopamine and norepinephrine. Currently, in close collaboration with Li lab, we are focusing on further optimizing the performance of existing sensors, as well as expanding the strategy for more signaling molecules, especially for cytokines, chemokines and neuropeptides that are critically involved in neural-immune interactions. We are also actively establishing high-throughput screening platform, and exploring other sensor backbones for detecting diverse signaling molecules. 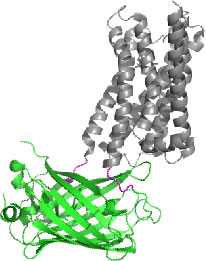 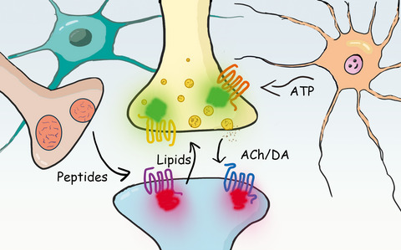